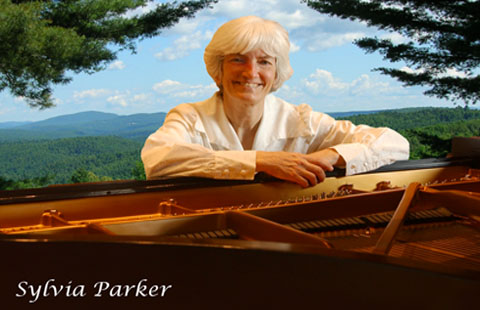 Béla Bartók: Peasant Jewels. Sylvia Parker, piano
Centaur Records (2014), www.centaurrecords.com
The great Hungarian composer Béla Bartók (1881-1945) loved the folk music of his native land. He collected thousands of peasant melodies, and then presented many of them in musical arrangements in order to make them, in his words, “more palatable to the taste of the public.” Here in this album are Bartók’s myriad arrangements for solo piano. They encompass happy, sad, silly, serious, simple, ornate, charming, boisterous styles. Bartók mounts all of these precious jewels in settings that are “palatable” –nay, delicious.
Sample: Bartók SonantinaFinale Parker.mp3

Sylvia Parker & Béla Bartók : CD Review
Montpelier Times Argus and Rutland Herald, May 14, 2015
“Béla Bartók: Peasant Jewels,” a two-disc set just released by Centaur, can be enjoyed in two ways: one, as a University of Vermont senior lecturer’s compilation of Bartók’s complete arrangements of folk melodies for piano, or as a concert pianist’s sympathetic and excellent performances of intriguing and beautiful music.  Parker has beautifully combined erudition and heartfelt performance in creating a window into the deeply authentic ethnic world of Béla Bartók. --Lowe
Read more:  TimesArgusRutlandHeraldMay14 2015.pdf

UVM Prof Gathers Béla Bartók’s Peasant Songs for Solo Piano
sevendaysvt.com May 20, 2015
In 1987, after she built her house in Berlin, Vt., pianist Sylvia Parker began hearing rumors about the neighborhood's musical history. "People started asking me, did I know anything about a musician who once lived up the road?" recalls the University of Vermont music professor. "Finally I just heard too much of the gossip to put it away."  Parker soon discovered that the "musician" was Hungarian composer and pianist Béla Bartók. During the summer of 1941, Bartók spent a month at a friend's house "a short walk" down the road from Parker's. The discovery impelled the UVM prof to become a Bartók scholar herself — work that culminated in her just-released two-CD set of solo piano works, Bela Bartók: Peasant Jewels. --Lilly
Read more:  sevendaysvtMay20 2015.pdf

'Peasant Jewels' Album Shines New Light on Bartók
UVM Today, Fall 2015
After studying Béla Bartók's piano harmonizations of peasant folk songs the composer and pioneering ethnomusicologist had recorded in the Eastern European countryside, Sylvia Parker was so taken by the brilliant compositions, she decided to be the first person on earth to record all 152 of them together in a single album.  –Wakefield
Continue reading...

Review of Parker CD
American Record Guide, 2006
This recital of works by composers who were formidable keyboard players is varied and easy on the ears. Parker's playing is warm and plush, as is her instrument, a Colodny Steinway recorded in the resonant University of Vermont Recital Hall. Her Scarlatti has careful voicing, with interesting overtones and nuances. Mozart's Sonata 12 is limpid and lyrical. The four tone paintings by Griffes are gently exotic, with gorgeous bass sounds and generous pedal. Some may want more bite in Bartok's Sonatina and Suite (Opus 14), but I find Parker's subtle musicality refreshing.  --Sullivan

UVM pianist in outstanding recital
The Times Argus, December 15, 2006
Parker's outstanding recital program, recorded this year at the UVM Recital Hall in Burlington, Vermont, includes traditional works by Scarlatti, Mozart and Bartók, all well-played, but it is the "Roman Sketches," Opus 7, by American composer Charles Tomlinson Griffes (1884-1920) that makes this a true gem of a recording. --Lowe
Read more:  UVMpianist2006.pdf

Jenny Lind and P.T. Barnum: A Success Story of Music, Business, and Philanthropy
College Music Symposium 2019
https://doi.org/10.18177/sym.2019.59.sr.11442
Abstract:  Abstract: Soprano Jenny Lind (1820-87), known as the "Swedish Nightingale," toured the United States in 1850 under the auspices of "America's Greatest Showman" and self-proclaimed "Prince of Humbug," P. T. Barnum (1810-91). The tour was a phenomenal success for both of them and made Lind perhaps the most famous person on earth that year. This article presents historical information, pictures, documents, and commentary about these two historical figures and their relationship. It also offers critiques and descriptions of her singing, alongside corresponding recordings of the music she sang. Because there was no recording technology invented during Lind's lifetime, these modern recordings by other singers are used to bring her singing to life.


Béla Bartók’s Other Microcosmos
MTNA eJournal, September 2014
http://www.mtnaejournal.org/publication/?i=225199
Abstract:  Petite Suite for piano is the last among Béla Bartók’s many settings of authentic folk melodies.  A rarely played hidden gem derived from 44 Violin Duos, it is within reach of the intermediate/advanced pianist.  In addition to providing engaging performance repertory, it provides also a microcosmos of Bartók’s work with peasant music.  This article offers an opportunity to compare directly Bartók’s research, composition, and performance inspired by the peasant music that shaped his musical thinking.  Here his notations of authentic folk melodies appear alongside the scores of his piano arrangements thereof.  Here his field recordings of peasants singing and playing appear alongside the Violin Duos and his own piano performance of Petite Suite.  The author provides background context along with brief discussion of each movement.  Juxtaposing the sound recordings of these folk melody “jewels,” as Bartók called them, brings them to life as no verbal description can.

Claude Debussy’s Gamelan
College Music Symposium 2013
http://symposium.music.org/index.php?option=com_k2&view=item&id=22:claude-debussys-gamelan&Itemid=146
Abstract: The year 1889 marked the 100th anniversary of the French Revolution and the nation celebrated with the Paris Exposition Universelle, an extraordinary World’s Fair. The event’s importance is marked by France’s most famous icon, the Eiffel Tower, built for the occasion. Twenty-seven year old Claude Debussy frequented the many exhibits from all over the world and was enthralled by the Javanese gamelan and the dancing it accompanied. The experience inspired him later to capture the sounds of the gamelan in his 1903 piano composition Pagodes. This article examines how he does so and places Pagodes’ composition within the contexts of documentation by his contemporaries, his other works, and recent scholarship about exoticism. Four principal elements of gamelan music—timbre, tuning, polyphonic layering, and rhythmic structure—are examined through the eyes of twentieth century ethnomusicologists. The same four elements are analysed in Pagodes. Elements of Western musical composition complement the analysis. What emerges is not a vague impression but, rather, a remarkably successful rendition of the Eastern gamelan on the Western piano.

A Riverton Retreat: Royal Charter to State Forest
Vermont History Vol. 78, No. 1, Winter/Spring 2010
http://vermonthistory.org/research/research-resources-online/vermont-history-journal/volume-78-2010
Abstract: A piece of Riverton, Vermont, evolves over the course of two centuries from empty land in the Royal Charter, to the site of a grand cottage peopled by diverse occupants including a tycoon’s family, a Hungarian hostess, and composer Béla Bartók, to empty land once again, now preserved as state forest. [Note: The author lives just up the road from the cottage in this article.]

Béla Bartók's Arab Music Research and Composition
Studia Musicologica Vol. 49/3-4, 2008
http://www.akademiai.com/doi/abs/10.1556/SMus.49.2008.3-4.10
Abstract: In 1913 Béla Bartók traveled to Algeria to research Arab folk music. He took with him the most modern technological device then available, the Edison phonograph, and recorded Arab peasants performing their music. Analysis of his ensuing scholarly documentation and free composition reveals the inspiration Bartók drew from Arab folk music, not only in his treatment of traditional musical elements-melody, rhythm, and harmony-but also in novel incorporation of exotic timbre, scales, drum modes, ululation, and exorcism. This paper elucidates diverse musical elements with examples from authentic folk music and Bartók's compositions. What emerges is a remarkably comprehensive image of Arab music, seen through the lens of Béla Bartók's unique scholarship and creativity.

Understanding Sonata Form through Model Composition
Journal of Music Theory Pedagogy Vol. 20, 2006
http://jmtp.ou.edu/journal-article/jmtp-journal-volume-20-all-articles
Composition is an important aid to musical understanding. This paper describes a plan for guiding intermediate music theory students to hone their understanding of classical sonata structure through composition. Sonata-allegro is arguably the quintessential form in tonal music, certainly the most elaborate and prescriptive in terms of its component parts. The average undergraduate student comes to an understanding of the contrasting functions of the sonata's thematic, transitional, and developmental sections only with difficulty. Students who compose such sections themselves acquire a better understanding of the form than they who limit their study to analysis. Composing a sonata may seem too large a project for an undergraduate class in form and analysis. Yet such a project was completed, with great success, in an intermediate theory class at the University of Vermont. More than a success, the experiment culminated in three students presenting their projects at a conference of the Vermont Academy of Arts and Sciences. This article recounts how the project began as a multi-part homework assignment with drafts and revisions spreading over several weeks, continued in a take-home segment of the midterm exam, and concluded in presentation of compositions by the most successful students in a scholarly venue.